A plague of robots

Forget lumbering rovers or exotic aircraft. Penelope Boston, the director of cave and karst studies at the New Mexico Institute of Mining and Technology is proposing sending swarms of tiny robots to Mars that would literally hop about the surface using polymer-based artificial muscles that would propel then unward of a meter a jump. The idea has considerable merit, as the tiny robots would be able to reach places a rover could not. More at the MSNBC website.
Posted by John Gosling at 1:48 pm

New pictures of Mars snapped from orbit may have found the resting place of the ill-fated British Beagle landing craft. Proffesor Colin Pillinger seems pretty convinced that he has found the crash/landing site and it seems likely that the craft came down to fast because the atmosphere was thinner than expected. There are a lot of detailed images and interpretations available here at the Beagle 2 website.
Posted by John Gosling at 9:18 pm 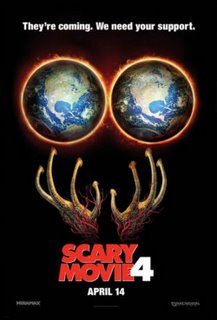 Scary Movie 4, (did we ever need 1-3) has released a bunch of teaser posters, one of which indicates that the newest installment in the franchise is going to spoof (amongst other things) Spielberg's War Of The Worlds.
Posted by John Gosling at 9:47 pm

New War Of The Worlds comic

First there was Classics Illustrated, then Killraven, (and a few more inbetween) but now there is a new and pretty good looking contender on the block. Boom Studios have a new comic book in production. Not much to be seen yet on the website but there are some enticing looking images to be found here.
Posted by John Gosling at 1:42 pm

The British government has approved a higher than normal spend on a future space mission. 108m euros (£73.2m) has been allocated to the Exomars lander which will launch for 2011. Speaking at the ministerial meeting, science minister Lord Sainsbury said: "As a major contributor, the UK will have a leading role in this programme which is set to improve our understanding of Mars and the Solar System." The probe will use similar airbag landing systems to previous sucessful landers, but will bring some exciting new science to the Red planet, including a drill which will be able to dig deep into the Martian surface.
Posted by John Gosling at 7:05 pm

Interviewed by Sci-Fi Wire, Jack Black, the star of Peter Jacksons's King Kong remake, has revealed that he modeled his part of filmmaker Carl Denham on Orson Welles. Welles of course made the 1938 radio broadcast that panicked many in America with his version of The War Of The Worlds. More at scifi wire.
Posted by John Gosling at 8:24 pm

The European Space Agency (ESA) is meeting this Monday to discuss funding on a number of new projects, one of which would be a robotic probe to Mars. The project is by no means certain to be greenlit as several programmes are chasing the money. More at the BBC.
Posted by John Gosling at 1:22 pm