The omens are good that the long gestating John Carter of Mars movie is now a certainty, with further casting announcements having been made. English actors Samantha Morton, Dominic West and Polly Walker have all joined Disney's adaptation of the Edgar Rice Burroughs book series. Morton plays Sola, a Martian who befriends Carter; West plays Sab Than, prince of the Zodangans and Walker takes on the role of the merciless Sarkoja. Taylor Kitsch (best known by genre fans as Gambit in the recent Wolverine movie) has already signed on as Carter. Andrew Stanton, a long time Pixar alumni (his credits include the marvellous Wall-E) is directing for a 2012 release date.
Posted by John Gosling at 1:31 pm

War of the Words

I often find it amusing to see how often The War of the Worlds radio broadcast of 1938 is used as the go to metaphor in doom and gloom stories. I would not normally mention a specific example, but I am strongly impelled to in this case as it gives me an opportunity to deviate off message and register my disgust at the negative attacks on the NHS presently clogging the American press.

I’m a British resident with a mother in her 80s and I also have a young daughter, so I can talk from experience of both ends of the spectrum. I’m particularly incensed that according to certain American commentators and politicians, my mother should be dead under the NHS. Well, here’s the truth. She would be dead, if NOT for the NHS. During a recent serious illness, at no point did anyone suggest she should be discarded, tossed aside, left to die! She was treated without question of cost – in fact, when we suggested that private care might be best to speed things up (because yes, the NHS can be slow) her consultant, (who would have pocketed the fee) urged us to stick with the NHS as he would have better access to the full suite of medical resources. My daughter also has had exemplary treatment. What American commentators seem to forget in their pathological hatred of anything that smacks of socialism, is that here in the UK, you can get private care quite easily, so we’ve got the best of both worlds. I’ve seen television programs showing thousands of impoverished Americans turning up at charity health fairs, some having travelled hundreds of miles in a desperate quest for free treatment. So how dare the right wing disparage our NHS when America clearly can’t look after its own people with anything approaching care and dignity. Rant over. Normal service will now be resumed.
Posted by John Gosling at 11:09 am

The High Resolution Imaging Science Experiment (HiRISE) camera on board the Mars Reconnaissance Orbiter has snapped an image of the Opportunity rover. Taken on its 1783rd sol (Mars day) on the Red Planet, the image clearly shows the tracks of the rover, which had driven some 130 meters on the previous day. Astounding images like this are routinely used by the Opportunity operations team to plan out the path taken by the rover, which is presently making for the Endeavour crater. 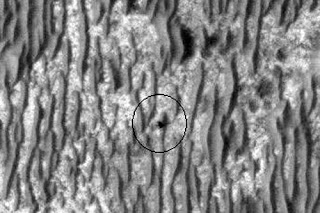 Packed into a 15-inch shroud payload, a newly developed inflatable heat shield was recently put through its paces by NASA engineers. Launched to a height of 124 miles, the shield automatically inflated itself into a 10-foot diameter mushroom shape of silicone-coated fabric. Given the success of the mission, which splashed down in the Atlantic Ocean, NASA is hopeful that the shield will be useful not only for re-entries into the earths atmosphere, but also as a shield for future Mars missions, where space and weight are at a premium. More info at popsci.com
Posted by John Gosling at 8:42 pm

Rock and a hard place

There's a community of ardent armchair researchers to be found on the Internet determined to prove that intelligent life once existed on Mars. To this end, they're scouring images returned from Mars looking for a smoking gun. One of the most perplexing images that has turned up in this search appears to show a monolith like object on the Martian surface, in fact not a little like the famous monolith in 2001 A Space Odyssey. But of course at the other end of the spectrum, scientists working in the field of Mars exploration are less than thrilled to be told they are covering up the existence of life on Mars, though I've yet to see it explained why they would send probe after probe to Mars with all the attendant risk that they'll be rumbled. And so to the Monolith, snapped by the Mars Reconnaissance Orbiter. Scientists at the University of Arizona are equally determined to put the monolith down to natural causes. Most likely says Alfred McEwen, "it's more likely that this boulder has been created by breaking away from the bedrock to create a rectangular-shaped feature." That sounds pretty reasonable to me, but while my strong inclination is to err on the side of caution, that's not to say that one-day, some amateur observer might spot something missed by the experts. But for now, the scientists at NASA really are stuck between a rock and a hard place. 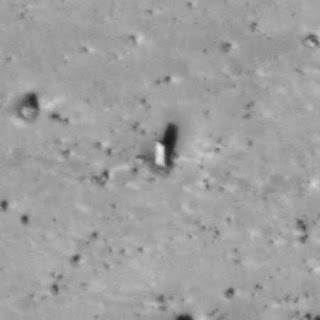