There have been plenty of War of the Worlds comics over the years adapting either the original novel, referencing the Orson Welles radio play, or indeed striking out in new and novel directions, for instance Killraven and The League of Extraordinary Gentlemen, but it has always seemed notable to me that there was not one single adaptation to be found of the iconic 1953 George Pal War of the Worlds movie. Well, how wrong I was. There is indeed such a comic, but I had to look to Spain to find it.

Oddly, this unique adaptation does not hearken back to 1953 when the movie was first released, but to several decades later, in 1979. The four part story was published by Editora Valenciana, a company based (not unsurprisingly) in the city of Valencia. Editora Valenciana was founded in 1932 and unfortunately is no longer in business, but until it’s closure in 1984 it released a wide range of titles, from reprints of American comics such as Batman and Superman, to home produced hits like Roberto Alcázar y Pedrín, a massively popular detective series co-created by the founder of Editora Valenciana, Juan Bautista Puerto.

La Guerra de los Mundos is a 4 part, 64 page series in full colour throughout. The artist and one presumes writer is one Michael Lucas Rafael Catala, who went by the penname Karpa. Karpa is well known in Spain for his work on the long running series Jaimito, which looks to be something along the lines of Dennis the Menace (the US version) or Archie and another very popular juvenile humour title called Pumby. La Guerra de los Mundos therefore seems a bit of a departure for him.

La Guerra de los Mundos was very clearly produced with a copy of the movie close to hand, as the plot cleaves pretty close to the script, though with more action inserted into the battle scenes. The covers are striking, though unrepresentative of the interiors, as their bombast does not transfer to the actual strips, and unfortunately a lot less care seems to have been taken in general with the interior art. Perhaps it’s just me, but it looks rushed and rather sloppy, though this sketchy approach may just be the accepted Spanish style, and so perhaps I am judging too harshly. 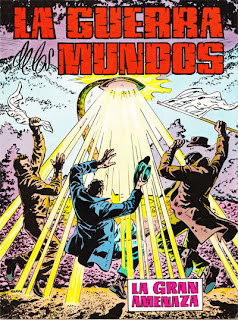 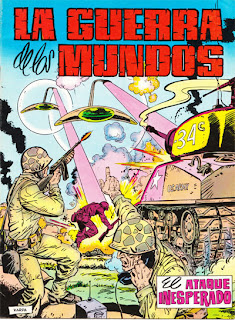 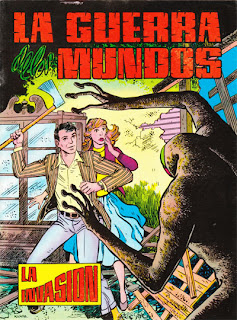 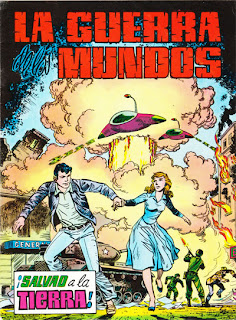 However, when you look from issue to issue, consistency in the facial features of characters does seem very lax.  The likenesses of actors such as Gene Barry and Lewis Martin are sometimes pretty good, though Ann Robinson fairs less well, but Barry’s face morphs alarmingly from issue to issue, from cover to cover, and sometimes it seems page to page. I’d go so far as to say that the first issue is by far the best in terms of faithfulness to the look of the film, and things get more and more rushed from there on. The colouring is particularly poor, though perhaps the printing process is to blame, or the artist was under deadline pressure, but no matter how many excuses I offer up, I have to be honest and express my disappointment at the production values on show here. 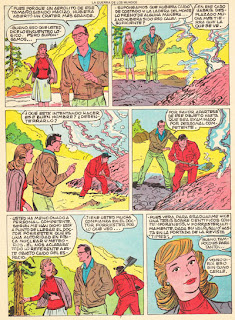 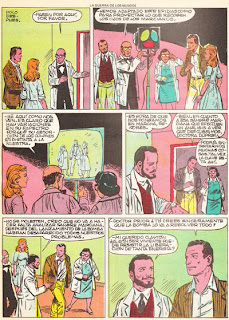 Make no mistake, I’m delighted to have this in my collection, but there’s clearly room for someone to take another shot at a comic book version of the 1953 movie. In closing, I wonder, did Paramount know about this comic book series? There is a copyright on the back covers to a Gofer Films, which does seem to have been an active distributer of various foreign film and television properties in Spain at the time, but it would be interesting to know if Paramount head office gave their blessings.
Posted by John Gosling at 12:47 pm