War of the Worlds Season 2 at last!

It's taken the best part of 5 years since the release of season 1 on DVD, but at long last we're going to get the conclusion to the War of the Worlds TV series. Dating back to 1988, the series ran a scant 2 years and starred Jared Martin as maverick scientist Harrison Blackwood, battling aliens and penny pinching government bureaucracy. The first season featured some inspired episodes, particularly one set in Grover's Mill, where Orson Welles set his 1938 invasion, but the second season lurched off in strange directions. Suddenly the series is set in the future rather than the present day and the original alien invaders are themselves kicked out of frame by a new set of aliens. Earth is portrayed in a dire environmental state, with social order breaking down and the characters we came to love in the first season are either killed off or their personalities rewritten. Blame a new creative team who apparently barely bothered to take much notice of the first season. I still recall there were some good episodes, and it's good to get to see the 2nd season on DVD so I'll be in line to get one, but if you've only ever seen Season 1, be prepared for a shock. Release date in the USA is set for October 26th. There's a pre-order page on Amazon, but it lists C. Thomas Howell as the star, which means the Amazon editorial team are mixing it up with the recent direct to video War of the Worlds movies from The Asylum film studio.
Posted by John Gosling at 7:31 pm

A video of a monster storm cloud described as something out of The War of the Worlds has gone viral, and deservedly so. It's a truly stupendous looking event, rolling in across a Helsinki beach in a matter of minutes, sending people fleeing for shelter. As it happens, a previous War of the Worlds radio panic was made worse when the radio station described the invaders as advancing on the capital inside a huge cloud. People saw ordinary storm clouds in the sky and panicked. Fortunately there was (apparently) no alien spaceship inside the Helsinki cloud, but as an example of freak weather, this is certainly out of this world.

Battle: Los Angeles has War of the Worlds vibe

I'm getting a distinct War of the Worlds vibe from the forthcoming movie Battle: Los Angeles. There's not a lot known yet about the film as only a few seconds of footage have been officially released, but the poster campaign is inspired. I particularly like the reference to the "The Great Los Angeles Air Raid" of 1942, when jumpy anti aircraft crews opened up on a phalanx of mystery lights that buzzed the city. Was it an off course flock of geese, or could it have been a fleet of flying saucers? Battle: Los Angeles goes for the latter, suggesting that the "Air Raid" was just the tip of the iceberg, and now in modern times, the aliens are back in force, and they're definitely not friendly.

Here's the worlds shortest trailer, clocking in at 2 seconds. Not sure if this is official or something grabbed at the recent Comic-Con.

And here's that fantastic poster. 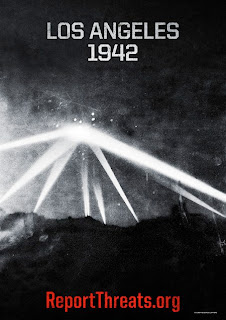 Gulliver of Mars: Beyond the War of the Worlds

A new comic book that blends the Martian adventurer Lt. Gulliver Jones with the Mars of H.G Wells is on the way. Writer Mark Ellis and artist Preston Asevedo look to be on to a winner with this intriguing mash up. Gulliver Jones is the original Martian hero, predating the more famous John Carter by a number of years. In bringing the two books together, Ellis is imagining a post invasion earth traumatised by the Martian onslaught, a situation he postulates would, "make the fear the US experienced in the wake of 9/ll seem like concern over a hangnail." Jones is back on earth when we rejoin him, a hero of the war against the Martians, and now ready to take command of a new space vessel based on Martian technology that has been reverse engineered by none other than Nikola Tesla. Nice to see Tesla get a shot at taking on the Martians, as his great rival Thomas Edison had a similar opportunity in the 1898 newspaper serial Edison's Conquest Of Mars. You can find some fantastic art from Gulliver of Mars: Beyond the War of the Worlds here.
Posted by John Gosling at 1:26 pm