Yes, it’s strange but true; Mickey Mouse really did fight the Martians in an Italian comic book version of The War of the Worlds, though in Italy he’s better known as Topolino. Introduced into the country in 1932, the title’s first publisher Mario Nerbini swiftly found himself in trouble with Disney’s Italian representative as he had neglected to adequately secure the rights, necessitating a temporary change of title and a hastily retooled look to the character. However, with the rights issue duly settled, the title settled back to Topolino and the character was restored to his recognisable Disney look, but then in 1935, rival publisher Arnoldo Mondadori personally persuaded Walt Disney that his company should take over the licensing for the character. Mondadori set about changing Topolino to a pocket size publication, (previously it had been published in a large newspaper format) and transformed it into a massive success, selling hundreds of thousands of copies a week at the height of its popularity. 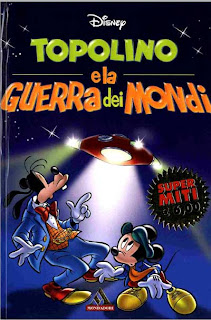 Topolino has been in almost continuous publication to this very day, with only a short enforced hiatus during World War 2, and has featured a great deal of work produced by local writers and artists. One of the most renowned and well respected series created specifically for the Italian market has become known as the Grand Parodies, of which Topolino e la Guerra dei Mondi is a recent addition. Begun in 1949, the first of the Grand Parodies was quite extraordinarily the l'inferno di Topolino, an adaptation of Dante’s Inferno, which mind-bogglingly translates as Mickey in Hell. In subsequent issues, Mickey and his pals would find themselves transported into many other classic worlds; Donald Duck was marooned uponTreasure Island, Uncle Scrooge journeyed to the Centre of the Earth and Pluto explored the Call of the Wild.

Topolino e la Guerra dei Mondi was published across two issues on January 18th and January 25th 1987, (numbers 1625 and 1626) and is a surprisingly faithful 59 page adaptation of The War of the Worlds, though of course it has been heavily Disney-fied and the more disturbing elements of the story expunged; I don’t think anyone actually wants to see Goofy hideously disintegrated or Minnie Mouse exsanguinated of blood, though on second thoughts, Disney re-imagined in the style of David Lynch would certainly be a fascinatingly subversive experience. 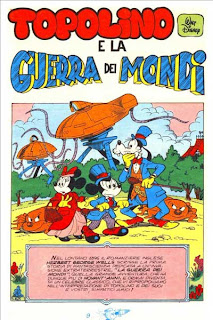 The story begins with Goofy seeking out Mickey in great excitement to announce his new interest in astronomy. The two friends meet up later at Goofy’s observatory and are witness to a series of explosions on the surface of Mars. Goofy wonders if the Martians are attempting to communicate, but Mickey finds the idea funny and suggests it is probably just a volcano. Next day however, Goofy sees the arrival of the first Martian cylinder and rushes back to town to announce that the Martians have landed. He and Mickey return to the cylinder just in time to see the hatch open and a Martian emerge.

These Martians are naturally rather cute and not especially threatening. True they desire world domination, but you get the impression that life under these alien overlords would be relatively benign and though they deploy Tripods, Heat Rays and even the dreaded Black Smoke, these weapons are more of a hindrance than a mortal threat; the worst treatment anyone would need from inhaling their poison gas would be a throat lozenge and a nice strong cup of tea. Similarly, when Goofy leads a delegation to greet the Martians, the only casualty is his white handkerchief, which gets zapped. The story also ends on a fairly upbeat note, with the Martians reduced not to rotten putrefying corpses killed off by earth’s bacteria, but to coughing, sneezing, wheezing victims of Goofy’s cold. It’s basically an intergalactic case of man-flu, and the Martians depart at stories end in search of a good all-in-one remedy. Well, I made that last bit up, but you get the point.

The well crafted story was written by Alessandro Sisti (1960-), a regular writer for Disney Italia since the 1980s and drawn by the talented Maria Luisa Uggetti (1937-) and Tiberio Colantuoni (1935-2007). Both Uggetti and Colantuoni are well known in Italy and often partnered together on Disney comics. Colantuoni had created independently the long running character Bongo, a dopey looking Gorilla, and Uggetti is also responsible for several very popular characters in her own right. Their art for Topolino e la Guerra dei Mondi is fun, colourful and expressive, and though it is pitched at younger readers, it occasionally pulls off a surprise, especially one very nice full page splash page of Mickey’s horse rearing up at the appearance of a Martian Tripod. Most of all, you get the sense that there was a real reverence for the source material, and that this is no quick knock-off. 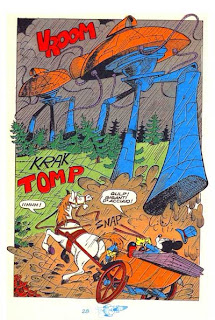 Topolino e la Guerra dei Mondi has been reprinted in Italy a number of times with different covers, and it has also recently been translated into English, though at present it is only available via the Disney Ipod and Android Apps.
Posted by John Gosling at 4:32 pm