The grinning ghost of Orson Welles was haunting the streets of Tbilisi last night, when a Georgian television station caused a panic by broadcasting the news that the Russians had invaded the capital. The Imedi station caused a meltdown in the mobile phone network and people were reported to have fled into the streets when it aired a hoax news story, claiming that Russian tanks were advancing and that president Mikheil Saakashvili had been killed. The station went on the defensive in the aftermath, claiming that they had made it quite clear that the broadcast was a simulation of what might happen should the Russians invade again, but as has happened so often before, it seems not enough people were paying attention to the disclaimers. I've argued in a chapter of my book Waging the War of the Worlds that a new panic similar to the 1938 Orson Welles War of the Worlds radio broadcast could happen again, and here's the proof. You can watch some of the broadcast on the BBC website.
Posted by John Gosling at 5:18 pm

I've mentioned the work of Neil Hughes before in this blog, when he unveiled a superb model of a Martian Tripod, but he's not been resting on his laurels, and now comes word of his latest War of the Worlds inspired creation, a captured Martian! I'm a big fan of Neil's work and the obvious love he has for the War of the Worlds, so great to hear that his latest design will be available from Eureka Miniatures soon. Here's a picture of Neil's Martian, and for more info and pictures you can check out his blog. 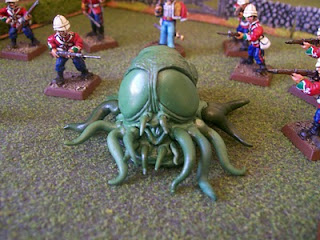