The year is 1895 and Britain has emerged resurgent and resplendent in the wake of the Martian invasion recounted by H. G Wells in his most excellent history of The War of the Worlds. An expeditionary force of the Kings own Electric Fusiliers has subjugated Mars and the red planet is now the newest jewel of the Empire. Peaceful contact has been established with Jupiter and Venus, trade and relations established and for those at the very apex of society, life has never been better. But all that glitters is not gold, for the opulence and splendour of Empire is (as has ever been the case) carried aloft on the shoulders of a great mass of struggling lower classes.

Near the bottom of this heap, but ever yearning to climb higher is young George Fox, a runaway who has fallen in with the self styled Professor Cagliostro Coffin. When first we meet, they are earning a precarious living exhibiting the stinking and rapidly disintegrating cadaver of a Martian invader. Unlike many of the “attractions” touted by their fellow fairground showmen the Martian is genuine, but as George is about to discover, little else connected with his employer is as it seems, and he is soon to be propelled into a terrifying adventure in search of the mysterious Japanese Devil Fish Girl.

This is my first encounter with author Robert Rankin, and I must confess that on the evidence of this novel, it seems I have been sorely deprived. Rankin writes in a charmingly irreverent nod and wink style, such that you shouldn’t go into this book expecting him to adhere to the style of H. G Wells or in any way provide a rational sequel. Rankin wants you to embrace the silliness, and to this end throws in sundry characters and events with little care for their historical accuracy, (history records the date of The War of the Worlds differently for one) and so quite happily supplies footnotes blowing raspberries at anyone who might dare to complain that people who are dead (and hence should know better), are alive and well. Hence Charles Babbage, inventor of the tragically unrealised Difference Engine here gets to build his fabulous computer and a certain Herr Hitler is to be found much out of his time, sullenly serving drinks on the airship Empress of Mars.

Much of the humour in the book is built on the implausibility of these random collisions in space and time, but (and don’t please construe this as criticism) it’s not a laugh out loud experience, rather it’s a comfortable warm blanket kind of humour, not particularly subtle, occasionally childishly scatological (I make no apologies that a dung throwing monkey is one of my favourite characters), yet written with such cheerful careless abandon that seldom are you without a wry half smile on your face. It’s fair to argue (and here comes a criticism) that Rankin flings, like his simian character Darwin, a lot of dung at the wall hoping it will stick, and occasionally the sheer quantity elicits a groan rather than a chuckle, but that’s like complaining the restaurant has piled on too many chocolate sprinkles on your desert, you may feel a tad queasy by the end, but the journey getting there was worth the occasional discomfort.

And what a journey it is for our hero George. Shipwrecked when the Empress of Mars does a Titanic, faced on one hand with cannibals and on the other with bureaucratic Martians, he finds love along the way and much against his will is prophesised to be the saviour of mankind, a long shot indeed when London becomes the focus of a three pronged assault by Martians, Jovians and Venusians. Done so well, I don’t think H. G Wells would be at all perturbed by this reverential rifling of his imagination, so it seems reasonable then to conclude this review in the style of Mr Rankin. A phantasmagorical cornucopia of Wellsian whimsy, dizzying intergalactical intrigue and daring doings that seldom fails to divert, delight and amuse.

Review of The War of the Worlds graphic novel, by Campfire

Let me voice one irritation right at the beginning of this review. If you’re going to draw a period piece set in circa 1900, then you should pay attention to the historical details. This book boasts a stunning and dramatic wrap-around cover, (it really is an attention grabber) but the people fleeing the Martians do not look as if they belong in the closing years of the Victorian era. I can be even more precise with one of the interior illustrations, since I’m pretty certain that British Soldiers did not start wearing berets as a matter of course until the early 1940s, and the first were only worn in 1924. (Thanks Google.) I’m also not entirely convinced by the accuracy of the curate’s costume, though I’m going to leave that as a nagging doubt as I draw the line at spending my evening researching the intricacies of religious habits. 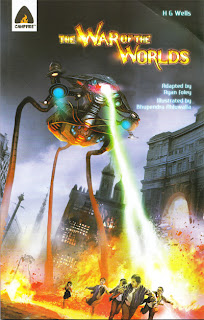 OK, so what’s good? Well, script writer Ryan Foley has stuck close to the original spirit of the novel, which might sound an obvious approach, but if you’re going to adapt a novel rather than go down the equally valid reboot route, it requires consideration and respect for the source, especially as the temptation will always be there to tinker. To his credit, Foley ticks all the boxes for a successful adaptation, while artist Bhupendra Ahluwlia turns in a little under 70 pages of consistently vivid art. His figure-work can be a little stiff at times, but the action scenes are generally impressive and the story flows well from panel to panel.

Those 70 pages allow Foley and Ahluwlia to get to grips with the story in gratifyingly expansive detail, though as has understandably happened before in comic book adaptations of The War of the Worlds, the account of the narrator’s brother has been excised, which means we lose the iconic battle between the dreadnaught Thunderchild and the Martian Tripods. That disappointment aside, the Tripods are nicely done, if derivative of others that have gone before, especially those from the Spielberg War of the Worlds movie. Though that’s probably a bit uncharitable, as there’s only so many ways you can draw 3 legged Martian war machines.

This version of War of the Worlds is just one of the newer entries in a long list of classic adaptations from publisher Campfire, including Wells’ The Time Machine and The Invisible Man. Judging from The War of the Worlds, their production values are commendably high and the company promotes a clear sense of mission to broaden the appeal of classic stories. There’s nothing to criticise there either, and going by their back catalogue, you could build a pretty impressive library from their output. 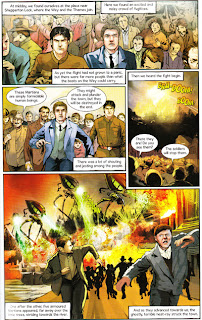 Rather unusually, Campfire is based in India, and I must say this gave me grounds to anticipate receipt of something with an unusual visual perspective, but Campfire is clearly in the business of producing work with a worldwide English language appeal. Hence the Indian origin of the work is well camouflaged. Fair enough, you can hardly begrudge Campfire going for the widest possible demographic, and of course, if you think a about it, a straight up adaptation of The War of the Worlds can hardly have the metaphorical equivalent of the Taj Mahal dropped into the middle of Woking.

However, as regards the overall success of their version of The War of the Worlds, it does seem that being separated from the script writer by many thousands of miles and from the original source material by over 100 years was a wide cultural gulf for the artist to satisfactorily bridge, though in this day and age of Internet research, there’s little excuse for getting the uniforms wrong or indeed geography. I am reasonably sure that Putney Hill in 1900 did not consist of a hill with one house on it! Yet based on the script, this is how Ahluwlia has chosen, rather too literally I fear, to portray it. Of course this will largely bypass juvenile readers to whom this is pitched, but if you’re going to promote your books as educational, you are letting your readers down if you skimp on your research.

I fully concede that if I were to go back over some of the other War of the Worlds comic books I have reviewed on this site, I could likely find any number of similar problems, but in this instance the inconsistencies seem somehow harder to ignore. At bottom line, you get a sense that the artist is not really in his comfort zone and has worked too closely from a muddled set of reference materials. Hence things that you would normally happily dismiss as artistic license here prove far more jarring. It’s a shame as Ahluwlia clearly has talent. It makes me think that a War of the Worlds set during the British Raj, written and illustrated from an unrestricted Indian perspective could be fantastic and open up all sorts of interesting lines of investigation as to how Indian culture at the time would have reacted to a Martian attack, but as far as this adaptation is concerned, I am going to conclude that it’s a respectable piece of work, fun to read, technically well drawn and adapted by Foley with care, but that it feels somewhat hobbled in execution, as if something has indeed been lost in translation.

The Flintstones' Invasion from Space

By then the series was undoubtedly showing signs of fatigue, but some of the old magic was still there, in particular the well honed bickering relationship between neighbours Fred and Barney. This as so often before forms the bedrock (no pun intended) of this episode.

It's time for Fred's lodge, The Water Buffalos, to hold their annual Masquerade Party, and Fred is determined to win best costume award, as he does every year. But things go horribly awry when he and Barney inadvertently pick an identical "devil" costume, which inevitably starts a big fight.  After a night cooling his heels in jail, Fred emerges more determined than ever to win the competition, and closets himself in the garage to work on a new costume away from prying eyes. Meanwhile across town at the local record company, the studio boss is giving the marching orders to a band called The Beasties, who are told in no uncertain terms that they are yesterdays sound, and a new band is about to hit the big time.

That band is The Wayouts, and their gimmick really is out of this world; they are dressed as aliens! It's an opportunity too good to be true for the record company publicity man, who persuades the local radio station to start transmitting news flashes that The Wayouts are taking over Bedrock.  Panic naturally ensues, but for Fred, fate is about to deal him an even worse hand; his new costume is also a space alien! Setting out for the party, Fred is completely oblivious to the chaos erupting all around him, though perplexed that people keep running away from him in terror. Along the way, Fred runs into The Wayouts and persuades them that it would be a great idea to come and perform at the lodge party, but the lodge members are getting ready to come to the defence of Bedrock, assuring Fred and The Wayouts a less than hospitable welcome.

This is certainly not a classic episode of The Flintstones, but the debt to the 1938 broadcast is obvious and serves to elevate it beyond the merely routine. The Wayouts are fun guest characters and the scenes in which the radio broadcast triggers panic in Bedrock are particularly well done. 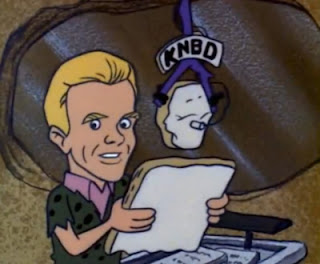 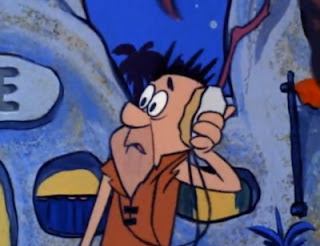 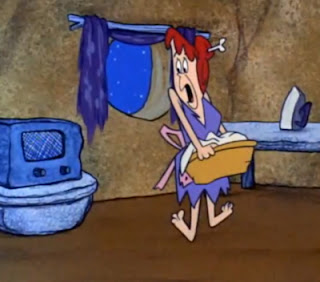 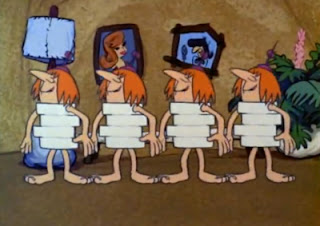 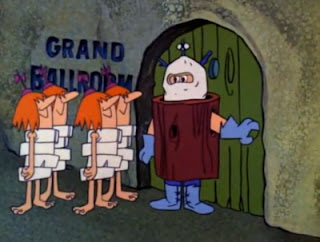