NASA's Mars Reconnaissance Orbiter has captured extraordinary images of geological activity as Spring arrives on the Red Planet. The beautiful images almost look as if they are biological in nature, but in reality they are caused by plumes of carbon dioxide vaporising from solid blocks of dry ice. During the Martian winter, carbon dioxide in the atmosphere builds up an underground layer of dry ice as much as a metre thick. As the planet warms up in the spring, the ice returns to a vapour, and as it finds weak points or cracks in the surface, it pours out, bringing with it a payload of dust that forms bizarre looking patterns on the surface. More details are available at the JPL website. 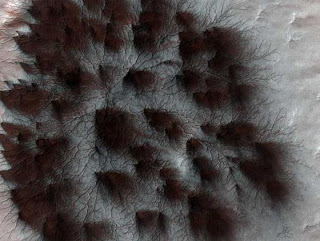 On March 31st, an intrepid crew of 6 entered the Mars 500 spacecraft simulator in Moscow. The hatch was closed and sealed, and will not be reopened for 105 days! Over the coming months, the crew will simulate a trip to and from Mars, including a landing, though 105 days is not in reality anywhere near enough time to simulate a real mission to Mars. However, this experiment is just a precursor to a much more ambitious follow up experiment, which will see another crew of 6 locked up for 520 days. The experiments are critical to the development of a real mission to Mars, which will require a crew to share tiny quarters for over a year. The psychological and physical strains this will create need to be well understood before any real mission is launched. You can follow the mission on the ESA website and the official Russian site is here.
Posted by John Gosling at 8:40 am