Review of John Carter: A Princess of Mars, issue 3

I’m really loving the adaptation of A Princess of Mars from Marvel Comics. It’s a measure of how much that I’ve been checking the Marvel App religiously every day for the last week desperate for the latest issue to appear. The wait has been worth it. Issue 3 certainly does not disappoint, in fact it’s probably the best so far.

I expressed some concern in my review of issue 2 that the modern language was proving a little discordant, but if I felt the balance was a bit off then, then it’s spot on here. In fact it’s a joy to read, with a light exuberant bounce to the dialogue and some great character moments between John Carter and Dejah Thoris as their romance begins to blossom. I think it’s fair to say that writer Roger Langridge and artist Filipe Andrade are completely in sync now, producing work that perfectly compliments each other.

I’m particularly impressed with the way they can switch seamlessly between light and dark moments, none more evidently in this issue than when Carter goes into berserker mode in a Thark arena. Andrade quite literally goes dark, he and colourist Sunny Gho (whom I can’t praise highly enough) forgoing the normal rich colour palette except for vivid sprays of arterial blood which splash shockingly across the page. A tip of the hat also to Skottie Young, who continues to provide fantastic cover illustrations.

I’m going to go out on a limb here and say this may well prove to be the definitive John Carter comic book adaptation. I can only hope that the same team can be persuaded to carry on adapting the other books in the series.
Posted by John Gosling at 1:37 pm

Marvel has two distinct and very stylistically different comic books in production at the moment based around the forthcoming John Carter (of Mars) movie. A Princess of Mars is a straight up adaptation of the original Edgar Rice Burroughs novel, while World of Mars is a prequel of sorts to the Andrew Stanton movie. While Princess of Mars is much more cartoonish in terms of art, World of Mars opts for a far more lifelike approach to its depiction of the characters and terrain of the red planet. 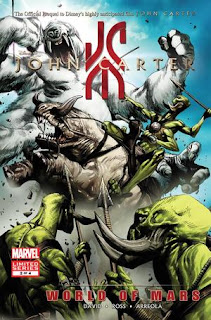 At the end of issue 1 of World of Mars, the villainous and vainglorious Sab Than had penetrated the defences of the city of Helium, intent of kidnapping the Princess Dejah Thoris and thus bringing an end to the war with his city of Zodanga. As Issue 2 opens, we see him carry out the first stage of his plan, stealing the Princess away but inadvertently plunging both into mortal peril when a Martian sand storm engulfs them. Meanwhile, the Tharks Tal Hajus and Tars Tarkas are on a quest to find the Gothan, a legendary Thark warrior undefeated in battle. Tal Hajus believes that if he can defeat the Gothan, then this will give him the mandate to unseat the leader of his hoard, who has become a bloated and twisted shadow of a true Martian warrior Thark.

The cover of issue 2 of World of Mars depicts a stunning encounter between Martian warrior Tharks and a White Ape, demonstrating that artist Luke Ross has a real affinity for the Tharks and other exotic fauna of Mars, but I feel his work on the more humanoid Red Martians seems less assured, or perhaps it’s just that this strand of the story is not as well written. I complained in my last review of Princess of Mars that the dialogue had been overly modernised for my tastes, but the converse is perhaps true of World of Mars; it really could do with loosening up a bit, it’s just too formal for my tastes. There’s also an awful lot of exposition that seems to drag the story down, largely in the strand of the story featuring Sab Than and Dejah Thoris. The two strands of the story are of course surely destined to meet, but at present I don’t feel they have much hope of connecting in any meaningful way.

One of the centrepieces of this issue is the fight trailered on the cover, though unfortunately something seems to have been forgotten here. It is I would suggest reasonably well established that the Tharks live in fear of the White Apes and that John Carter gains respect in the Thark hoard by completing the seemingly impossible task of killing one of these brutes, an outcome only possible because of his superior strength in comparison to the Martians. Yet in this issue, Tar Tarkas defeats a White Ape by leaping onto its back (surely only Carter should be able to leap like this) and strangling it to death with his bare hands. I was also vaguely perturbed to have his fighting move described as a Full Neslon! Surely that’s a rather human term; why not at least make up a Martian fighting move?

I’m really sorry to say that I’m just not feeling any great affinity for this series. Princess of Mars has rapidly become a favourite of mine, but this World of Mars seems a rather dull place. I’ve started, so I’ll finish, but I’m not holding out much hope that things will improve.

I have been following the long gestation of the new animated movie War of the Worlds: Goliath for some time now and with the recent securing of an international distributor, it looks like the publicity machine is gearing up. A new trailer posted to the Heavy Metal site certainly raises the hope that War of the Worlds fans are in for something special when the movie is released in 2012.

At over 4 minutes long, this new trailer gives us a very good, action orientated view of the movie. It’s stunning; very anime in style (though the production team is based in Malaysia) but most importantly, it definitely looks as if the designers have a passion for the detail, not just for the hardware, but the way a post invasion world re-engineered with Martian technology would look and feel.  We’ve never seen The War of the Worlds re-imagined in this way before in a movie, (Scarlet Traces comes closest in comic book terms) and the potential to really knock something out of the ballpark is there for all to see.

What the trailer doesn’t give is a very clear idea of the plot. It’s a breathless montage of marching Tripods, giant robots, explosions and aerial dogfights, and while it looks absolutely great, this movie will fail for me if it plays like a 90 minute video game. Of course the trailer is rightly pushing the buttons of a theatre going public saturated in high octane action imagery, so I was much relieved to also watch an excellent behind the scenes feature, which not only gives us a glimpse into the making of the movie and the obvious commitment of cast and crew to the project, but also provides an insight into the characters and dialogue.

If you’re read my reviews of the precursor War of the Worlds: Goliath comic book stories published in the pages of Heavy Metal magazine, you’ll know that I found them very lacking in any kind of compelling narrative, but listening in on some of the recording sessions with the likes of Adrian Paul and Adam Baldwin, I found myself cautiously hopeful that the story and characterisations underpinning the action will indeed rise to the occasion. Director Joe Pearson, co-writer David Abramowitz and the amazingly talented Malaysian animators and designers also paint a highly positive picture of their commitment to the story, such that this fusion of far-east design and western story telling could really turn out to be something special. I’m cautiously optimistic.
Posted by John Gosling at 10:57 am