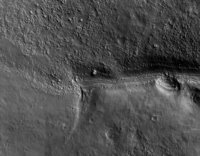 The high-resolution camera aboard the Mars Reconnaissance Orbiter has returned its first test image. The first test image is a 50km swathe of land in the planet's mid-latitude southern highlands. The resolution is about 7.6 metres, but this will get even better in months to come as the probe refines its orbit, with the result that we will be able to see unprecedented 1 metre resolution images.
Posted by John Gosling at 3:31 pm

The Canadian Space Agency has sent out a call to the countries scientists to start thinking about an all Canadian mission to Mars. Former space shuttle astronaut Marc Garneau broached the idea five years ago as president of the Canadian Space Agency but federal money was not forthcoming. With NASA scaling back on Mars mission as money is redirected toward a return to the Moon, other nations might well fill the gap. More on this story at canada.com
Posted by John Gosling at 10:44 pm

Raining on the Martian parade

It is a growing and popular belief in scientific cirles that the photographic and mineral evidence obtained by recent space probes points with a fair degree of certainty to the existence of running water in the distant Martian past. Gwendolyn Bart, a graduate student in planetary sciences at the University of Arizona has another idea, that perhaps the features can be explained by processes other than water. Bart and other scientists feel that Mars’ temperature and pressure are so low that liquid water could not have formed. Landslides and the flow of dust could just as easily explain the grooves and channels seen on the surface. More on this intriguing idea, (though personally I favour water) can be found at space.com.
Posted by John Gosling at 8:31 am

The Spirit Rover, after having accrued an incredible number of days on the Martian surface looks to be in the trouble. Spirit's right front wheel, which has been stuck before, has ceased moving completely. The rover has plenty of redundancy with its remaining wheels, but the problem is not so much the wheel as power. Winter is approaching and the with it the available supply of solar energy drops fast. Spirit needs to get itself positioned in a favourable position on a nearby hill in order to get the best orientation for her solar panels. So the rover is now in a race against time to make the hill where it can safely sit out the winter.
Posted by John Gosling at 10:24 pm

The latest issue of Spaceflight Magazine (the magazine of the British Interplantery Society) showcases Mars on the front cover (April 2006 issue) and devotes a number of pages to an indepth breakdown of European plans to put a man on Mars. It should be stated that these "plans" are highly spectulative and no budgets are assigned, but it is interesting to see how a mission to Mars might be launched by a conglomorate of European nations. Frankly, it's pretty depressing reading because it seems that the plans require an incredible outlay in time and resource. No less than 21 Energia launches are called for! Those with an interest in spaceflight history may recall that the Energia flew the then Soviet Buran spaceshuttle on its maiden (and only) flight. It's a monster rocket (though not as big as an Apollo) but 21 flights and a 5 year building program in orbit strikes me as insane. Worse still, for all this outlay, the study paper assumes a manned stay on the planet of just 30 days, yet the crew will be stranded in Martian orbit for a year and a half. I desperately want to see humans on Mars, but this plan is not the way to do it and simply serves to strengthen the argument of those who favour unmanned missions. With NASA looking at a rover with a nuclear power plant for massively extended missions, one can hardly see the point of a mission that deposits humans for 30 days and allows them just 7 EVAs of no greater than 5km from the landing point.
Posted by John Gosling at 2:17 pm

Mike Trim is the versatile artist responsible for some of the iconic designs in Gerry Anderson's best-known television shows, such as Thunderbirds and Captain Scarlet. Of interest to War Of The Worlds fans is of course his fantastic work on the Jeff Waynes' musical version of the story, for which he contributed a portfolio of images that are rightly considered definitive. Now fans of Mike's work can treat themselves to a new book recounting his amazing career. "The Future Was FAB: The Art of Mike Trim" features hundreds of full-colour and black-and-white drawings, and can be preordered now from Fabgearusa.com.
Posted by John Gosling at 7:41 am

First there was the earth, then the moon, now Google has mapped Mars. Point your browser at google mars and you can work your way round the planet, switching between black and white photographs, infrared and elevation maps. You can even pinpoint the location of the Spirit and Opportunity rovers on the surface.
Posted by John Gosling at 9:44 am

At 2124 GMT (1334 PST), the spacecraft fired its engines as it approached the south side of the planet. 20 minutes later, the MRO switched from solar to battery power and entered into a period of radio silence behind the planet. The waiting team at the JPL lab in Pasadena were jubilant when the probe then broke radio silence. The probe is now in a 35-hour elliptical trajectory around the planet. At its furthest point it will swing out to about 44,000km (27,000 miles) above the planet's surface, but will spend the next six months adjusting the orbit by aerobreaking to enter a final circular 2 hour orbit. Only then will the science mission begin. The orbiter has 6 science instruments onboard, including the highest resolution camera ever sent to Mars.
Posted by John Gosling at 7:39 am

NASA's Mars Reconnaissance Orbiter is fast approaching orbital insertion, a point that has seen any number of previous missions come to grief. After a 27 minute burn today, the craft will enter into an extended aerobreaking sequence that will see the orbiter dip into the atmosphere some 500 times in order to further refine the orbit.
Posted by John Gosling at 8:03 am

War of the woes at the Oscars

War Of The Worlds failed to take any Oscar awards last night, falling to the might of King Kong in the categories of Best Effects and Best Sound. Kong probably deserved to win for effects, at least from a technical standpoint (the film itself was overwhelmed by the use of endless effects) but sound should have gone to War Of The Worlds., if only for the haunting and terrifying voice given to the invaders.
Posted by John Gosling at 7:36 am

It is reported that the ambitious plans to put men back on the moon and to travel on to Mars are having a seriously bad knock-on effect on big unmanned missions. NASA is scrambling to find money to run the shuttle fleet and keep the International Space Station alive, but funds are seriously stretched, and despite promises from NASA that there would not be budget cuts, a number of highly important science missions are facing the chopping block. Included in the rosta of troubled missions, a Mars sample return mission. Time magazine has a full (and depressing) report.
Posted by John Gosling at 9:32 am

An amazing snippet of Mars new thanks to AintItCool news. In an interview with director James Cameron (Terminator, Titanic) it appears he is working on a new camera to fly to Mars on a future mission. To quote: "One of the side projects that he’s doing is working in conjunction with the MALIN SPACE SCIENCE SERVICES group… those are the guys that developed the M.O.C. Global Surveyor that’s been mapping Mars for the last couple of years. That’s completely changed everyone’s belief of what MARS is. Well, the next big NASA mission is going to have a Live Video Stereo Motion Image device that Cameron has been developing with M.S.S.S. to bring us back live 3D video images in full motion from the surface of Mars… all tied to the back of one of those nuclear powered Rovers that’ll be exploring, if all goes well, for years. See… Evangelical Techno-Fetishist." The full interview is here.
Posted by John Gosling at 3:34 pm