War of the Worlds: Goliath trailer is up!

The much anticipated trailer for War of the Worlds: Goliath has been posted on the official site for the new animated movie. As trailers go, it gives little away about the plot and the first half is a little disjointed, (more random clips than coherent story) but when the action kicks in, wow, it's edge of the seat stuff! Animated in Seoul, South Korea, Goliath owes an obvious debt to Japanese Anime, but it is equally clear that this movie is not going to be a slave to any one art form, and as such gives every indication of shaping up as something refreshingly different. Let's hope that the extremely impressive visuals and very intriguing premise (15 years after the original invasion, an earth reinvigorated with Martian technology faces a 2nd attack) will be backed up by an equally impressive plotline.

Check out the War of the Worlds: Goliath trailer.
Posted by John Gosling at 1:06 pm

Boston to be invaded

It's that time of year again. October 30th will see the 71st anniversary of Orson Welles' War of the Worlds radio broadcast, and around the world, radio stations and theatres are preparing to mount their own versions. I've now received word of what I am sure will be the first of many such productions. This one is to be held at the Somerville Theatre in Somerville, MA, and looks to be a pretty cool going by the very nice website supporting the production. If anyone is aware of other productions, let me know and I'll post information here on the site.
Posted by John Gosling at 12:55 pm

Ice to see you - and make mine a long tall cool one.

University of Arizona researchers have made some startling new observations on Mars, having watched a patch of ice appear and disappear on the surface. That may not sound terribly exciting, but some significant deductions have arisen from the observation of the ice, which remarkably enough, was not only on the surface, but far from the North Pole. The ice looks to have been exposed by the impact of a meteorite, which gave the researchers the opportunity to watch how it behaved on the surface, and here comes the really exciting bit. By running some mathematical models, it was possible to make an estimate of the amount of ice likely to be mixed in with the soil, and with that knowledge it became possible to figure out the purity of the water based on how fast it dissipated; a whopping 99%! And that ice may just be a couple of meters below the surface, with the layer itself weighing in at a meter thick! This has got to be a big boost for the prospects of a sustainable human presence on Mars and for the possibility that life may yet cling to the planet. There's a very good and detailed article on the discovery to be found on the Cosmic Log page at MSNBC.
Posted by John Gosling at 12:58 pm

The term "the red planet" is of course synonymous with Mars, but the prevailing theory that the distinctive colour was a result of rusting causing by water flowing over the surface now has a challenger. Results from the Spirit and Opportunity rovers perplexingly revealed the presence of minerals that should not have survived contact with water, which set researchers at Aarhus University in Denmark on the trail of an alternative process that could explain the red colour. The solution they have proposed is that regular sand, when combined with magnetite (found in black basalt present on Mars) could have produced a red dust. The researchers found evidence for their theory after tumbling pure quartz in a hermetically sealed flask for seven months, eventually flipping it 10 million times. At the end of the process, some 10% of the sand had turned to dust, which when combined with magnetite developed a red hue. Wind action on Mars could have certainly produced a similar effect over millions of years. The chemical process is not yet fully understood, but if this is the explanation, we’ve got a lot to be thankful for. The black planet just doesn't have the same ring to it.
Posted by John Gosling at 1:02 pm

A few hours ago Google posted an explanation for the weeks long mystery of their UFO themed logos. Not as exciting as some had suggested, with theories ranging from a new Google product launch to an alien take-over, nor unfortunately can I now continue to claim that they are promoting my new book, Waging the War of the Worlds, though you have to admit, the timing was great. No, the truth is, as some had suspected, that Google are celebrating the birthday of H.G. Wells. So today a new logo goes live, and it's the best yet. Here it is, along with the previous 2. Click for bigger versions, and here's the full explanation of the UFO logos from Google.

The Spirit rover has now been mired in sand since early May and the chances of finding a way for it to escape are looking increasingly grim. Mission controllers have been using full-scale versions of the rover here on earth to simulate various options, but it may be that the rover is now permanently stuck, though this is not necessarily the end of its mission, as it can continue to relay scientific observations from a static position. An excellent summary of the efforts to free Spirit can be found on the spaceflight now website. A fabulous image has also been released of Spirit, snapped by the Mars Reconnaissance Orbiter. Look for the little white dot to the left of the Home Plate volcanic feature. 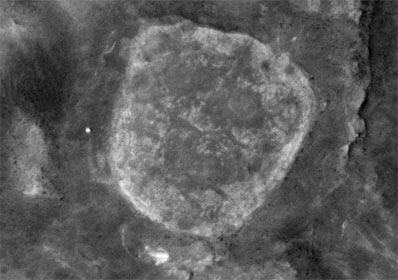 Credit: NASA/University of Arizona
Posted by John Gosling at 9:22 am

Google has been playing a merry game with its users the past few weeks by substituting its logo with ones featuring a hovering UFO. There's no official explanation from Google, which is famous for altering its logo to tie in with significant events like anniversaries, holidays and historic events, but this is the first time the logo has changed without any overt reason. That sent the internet abuzz with speculation.

Then this week Google did it again, posting a second UFO themed logo, this time featuring crop circles. Again, the Google Twitter account provided a clue, with the posting of a map co-ordinate: 51.327629, -0.5616088. A quick check confirms that these are the map reference co-ordinates for 1-7 Woodham Rd in Woking, England. Wells happened to live in Woking, though at Maybury Road. However, it was in Woking that Wells wrote The War of the Worlds and it just so happens that he was born on 21 September 1866. So is Google planning a H.G. Wells logo next week to celebrate his birthday?

My new book published - Waging the War of the Worlds

I am delighted to announce the publication of my first book. Waging the War of the Worlds is the most detailed account ever produced (so I firmly believe) of the 1938 Orson Welles War of the Worlds radio broadcast, but it also tells many new stories of radio panics, several every bit as exciting and calamitous to listeners as that first momentous transmission. Learn how Martian attacks have paralysed Brazil, Chile, Ecuador and Portugal, with detailed chapters containing masses of newly uncovered material never before presented in English. Waging the War of the Worlds is available direct from the publisher McFarland and from all the top online stores such as Amazon.
Posted by John Gosling at 1:55 pm

While NASA is struggling to find the money to get to Mars, there are those who think that space exploration (and Mars) represents our best hope for survival. Asked by New Scientist magazine for ideas to make the world a better place, luminaries from both science and business put space exploration high on the list of vital endeavours. J Richard Gott, professor of astrophysical sciences as Princeton University was vocal in his belief that Mars represents a bolt hole for the human race, commenting that a permanent presence on Mars would "...make us a two-planet species and improve our long-term survival prospects by giving us two chances instead of one." Virgin entrepreneur Richard Branson also spoke up for the merits of space exploration, though of course he would as he would reap some of the rewards via his Virgin brand spacecraft. Find the full range of comments at New Scientist.
Posted by John Gosling at 1:43 pm

A long awaited report into the future of NASA will, much as expected, throw a giant spanner into the works, concluding that the agency has nowhere near enough money to even get to the Moon, let alone Mars. Though the full report is still to be released, a summary sent to the White House last week makes for gloomy reading, suggesting that NASA will not be able to break earth orbit for the next 20 years if present expenditure levels are maintained. However, the report also sounds for the first time as if some real level headed thinking is taking place. NASA has see-sawed from one goal to another since the Moon landings, but never really had a long term strategy, so there is hope that the proposals outlined will give the agency some much needed focus. The report proposes a number of scenarios, including the idea that astronauts would travel to Mars but not actually land. This is not quite as crazy as it sounds, since the idea would be to use the orbiting astronauts to control robotic landers and rovers. The time lag between Earth and Mars is such that live remote control of probes is impossible, but having astronauts on hand, combined with cutting edge rovers, would be a potent combination. Not as romantic as a manned landing perhaps, but should such a mission provide compelling evidence for life, then the pressure for human footprints on the surface might well become overwhelming.
Posted by John Gosling at 1:22 pm